If you are roaming in Europe, there is no room to skip Rome especially when you are ancient architecture and history enthusiast. That’s enough of tongue-twisting.

En route to this city, my baggage was stolen from the train near Nice (France) while coming from Barcelona. I shall share that experience with details in another post. I had the plan to stay overnight in Nice but being so scared of it after the robbery I did not want to stay here even for a minute and headed to Ventimiglia in Italy which was just a 30-minute drive from here. When I reached Ventimiglia station, it was closed. I asked the police officer how can I buy the ticket to Rome and he advised me to use the machine. After my luggage lost, I was subconsciously too concerned about safety and security, so I asked him if it is safe here, he replied absolutely. Being a soldier, there was so much confidence in his body language while saying this; he was super friendly. I bought my ticket from the machine in 3 Euros as I had a Global Eurail Pass. I exited the train station, it was dark, and the whole town seemed to be asleep except a few restaurants opened where people were enjoying their dinner and having a chit-chat. I searched for a suitable hotel and found one to spend the night at 60 Euro.

It was a comfortable shelter for the night on the most top floor of the hotel. After setting up the things for tomorrow, I went to bed.

Next morning I woke up early as my train was at 06.41 am. The station was hardly 5 minutes’ walk from the hotel. I took the train; it was a local one, very slow. My journey to Rome was almost of eight hours.

It was going alongside the sea line, passing many cities and towns. My planned destination was Rome, but when the train stopped at Pisa Station, I changed my mind and got down from the train. 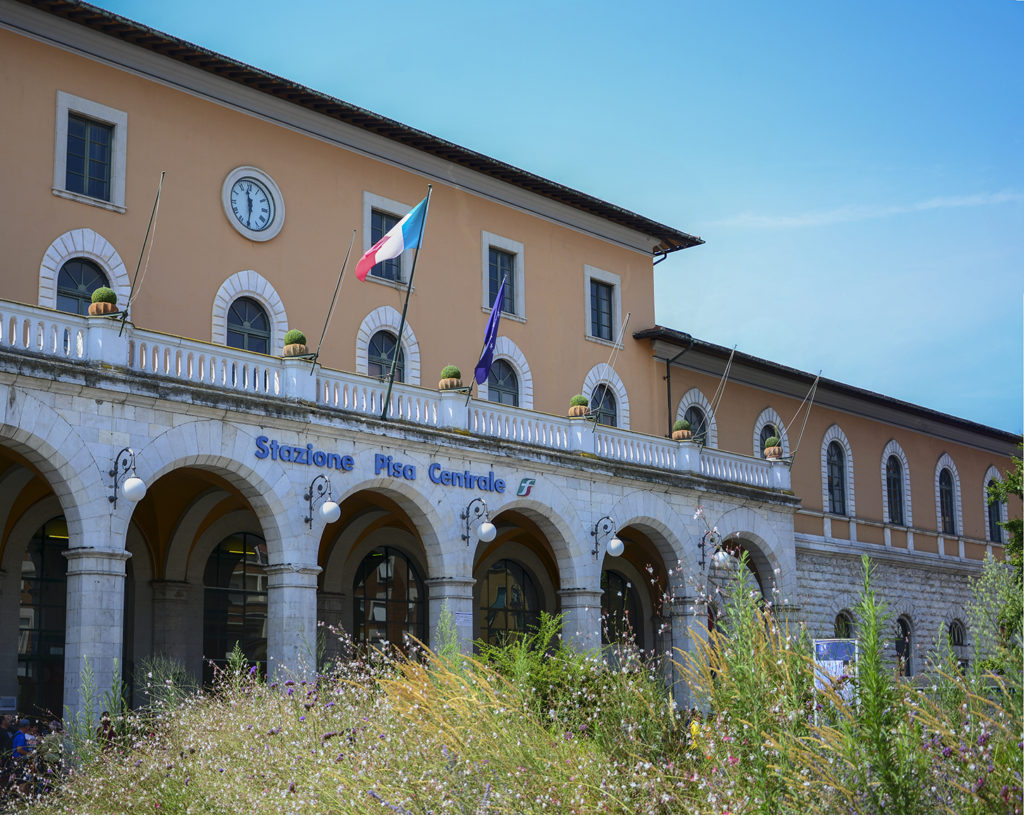 Just outside the station, there were many buses, and there was young staff, perhaps from city municipality to assist tourists. I took the ticket from the machine to Pisa tower at a price of 1.30 Euro however if you buy inside the bus it costs 2 Euros. Waited for the bus almost 20 minutes and it took another 20 minutes to reach Pisa Tower.

It was hot and sunny. The place was quite crowded, and it has to be like hundreds of thousands of tourists come to visit this place. People were taking pictures with the tower in different styles. I also requested a visitor to click some for me, so kind of him but none of those pictures are shareable. That’s the downside of travelling solo. You cannot use a pod in such a crowded place, and definitely, you cannot bother someone again and again to take your pictures. There are also two other structures in the same place to see Pisa Baptistery and Cattedrale di Pisa.

On the way back, I decided to go walking as it would give me more time to explore the city. There were many restaurants after all Italy is “Eatly”. I decided to have pizza in my lunch, what could have been a better place to have it than from the land where it originated.

On the way to the station, I bought some water bottles, a quick tip for travellers, always buy it from the supermarket as it’ll cost you three or four folds if you buy from street vendors or small shops. I reached the station and boarded the next train to Rome, which took almost 3 hours to arrive at Rome Termini Train Station which in the main station of the city.

I had reserved an accommodation on Air BnB, and it was almost 20 minutes’ walk from the station. Passing through various streets and alleys I reached the host accommodation, but he was not there. There was a couple who were staying in the same house, and the room next to theirs was supposed to be mine. They contacted the host who showed up after some time and informed me that he has given my room to a girl and cannot accommodate me. I got distraught and told him this was his problem and he needed to fix it. After arguments for over 15 minutes, he agreed to arrange me an alternative in a guest house and paid for it. He was ranked as super host on Airbnb, and I wasn’t expecting this experience at all.

Anyways… things happen, Colosseum was just minutes away from it, and it was golden hours of photography which I didn’t want to miss. Near the entrance was an army vehicle and some soldiers, ready to combat any threat. Since the unfortunate recent rise in the terrorist attacks, most of the European cities have increased the security especially on such monuments, train stations and airports.

The Arch of Constantine, while it's a beautiful piece of #art however you can see the #litter of #plasticBags and empty #waterbottles on the ground, I could have easily cropped it in the #picture but this it to make a humble request to all especially to the #tourists please keep every place clean you visit and #DoNotLitter . The Arch of Constantine #rome #italy #responsibletourism #travelgram #archofconstantine #nomadicpaki

I entered through the Arch of Constantine which was dedicated in 315, and it is the largest Roman triumphal arch. Sadly, there were empty water bottles and litter thrown on the ground. I humbly request to everyone especially to the tourists to not to litter and keep every place clean which they visit. I firmly believe in responsible tourism and to respect local laws and culture at all times.

The view of the Colosseum was magnificent, built in 80 AD, it is the largest amphitheatre ever built. It is estimated that it could hold between 50,000 and 80,000 spectators. It is one of the most popular attractions amongst tourists.

People find their unique ways to photograph it; this one was taken by a lady I met in Florence.

Next, I headed to Trevi Fountain, on the way one old man captured my attention. He was just sitting and overlooking the ruins. Perhaps he was indulged into his memories of youth or maybe he was just sitting there, getting some rest. It will always remain a mystery in my mind.

While I was wandering in the streets of #rome  this old man grabbed my attention, he was just sitting silently and looking at the #ruins.  I observed him for quite some time, perhaps just like me he was also thinking how this place had been lively during its time or perhaps he was  just indulged in his own thoughts .. What do you think?  #italy #oldman #nostalgic #Roma #italia #travelgram #nomadicpaki

Continuing my journey, I came across Altar of the Fatherland. It is a monument built in honour of Victor Emmanuel, the first king of a unified Italy.

I was walking through the streets of the eternal city, a city which has seen days of war and peace, countless generations.

As they say, Rome wasn’t built in a day, and you can’t see it in a day. Every other turn you take, you’ll encounter something marvellous dated back to several hundreds of years. Many street artists were demonstrating their art to the spectators. Some singing, some playing a musical instrument and some making paintings with spray colours.

It is such a favourite place that it was filled with tourists.

I kept on walking and exploring this city for some more time and visited Piazza Navona; it is a square with fountain and statues.

Then I took a bus to my guest house. It was in a touristy place. There were many restaurants, and people were enjoying their dinner. By then I also had an urge to eat something, and I ordered a Margaretta pizza which was quite large. I enjoyed the vibes of the night in Rome, and it was time to call my day off as I was quite tired by then. I checked in my guest house and went to my room. The guest house charged me another eight Euros to use the aircon. Never mind.

Next day, I went to the world’s smallest sovereign country both by land and population, the Vatican City. It is within the city of Rome and has a total area of just 110 acres and a population of 1,000 people.

Just at the entrance, a tourist guide stopped me; he was selling VIP tours for the Vatican museum, Sistine Chapel and St. Peter’s Basilica, world’s largest Basilica of Christianity. He asked me if I am from Pakistan. I replied yes I am. Then he started conversing with me in Urdu and started telling me about himself. He was also from Pakistan who had settled in Italy from last many years.  He was working for a tourism company which was authorised by Vatican City to sell priority tickets. If you buy a package from them, you don’t have to be in the long queues as they take you inside from the special entrance dedicated to such ticket holders only. Moreover, they provide you guided tour of almost 3 hours explaining the history and background of these marvellous places and artefacts in it. If you are really into such things, I suggest buying a VIP tour which you can also purchase online.

Quite surprisingly, there were also some beggars. 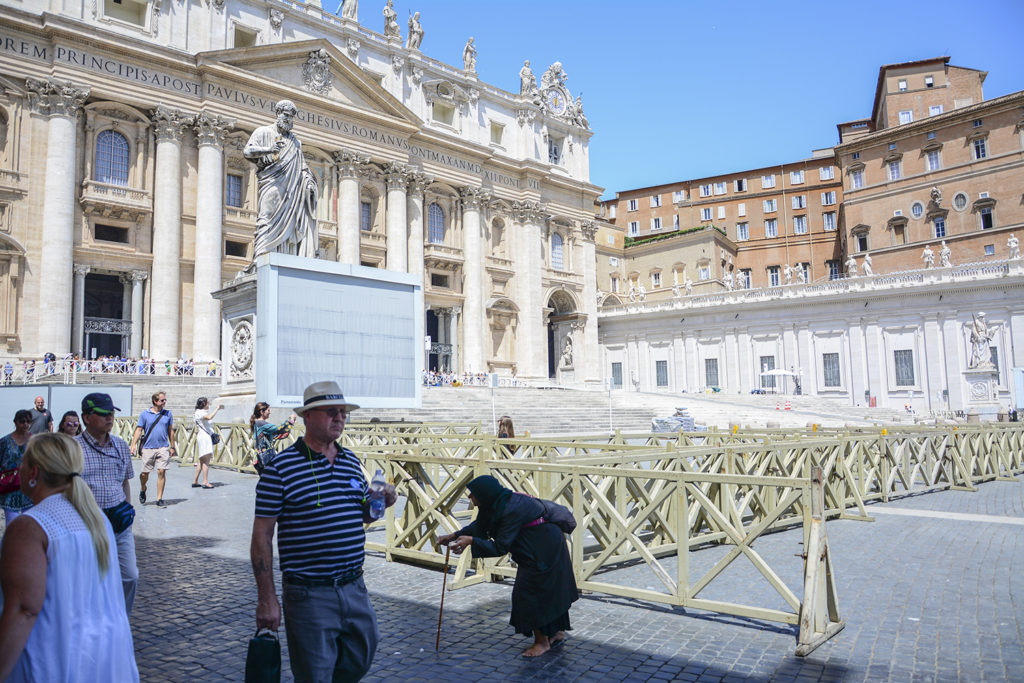 The dress of Vatican guards is world famous and loved by many; I asked them if I can take a picture of them. They were very polite and posed for my click.

Having taken its tour I was walking around its outer wall, and thinking how highly secure this place is, and our very own Tom Cruise breaches it in Mission Impossible in a minute. Hollywood can show anything.

My visit to Rome and Vatican had been excellent, do you have the plan to visit these fantastic places or have you been there? Share your thoughts in comments.

Getting a UK Visa in Dubai
Transit Tour of Moscow
A day trip to the micronation of Andorra, a jewel hidden between European giants

1 thought on “When in Rome, do as the Romans do”