Step into the Void at Roof of Europe

The day when I read about “Step into the void” I had decided that one day I’ll visit this engineering marvellous in the lap of astounding nature. The “Step into the Void” is a glass room with the glass floor, glass walls and glass ceiling panels that allows the visitor a unique experience enhanced by 1000 meters of free air directly under their feet, situated on the uppermost terrace of the Aiguille du Midi at an altitude of 3842 metres. It claims to be the highest attraction in Europe. 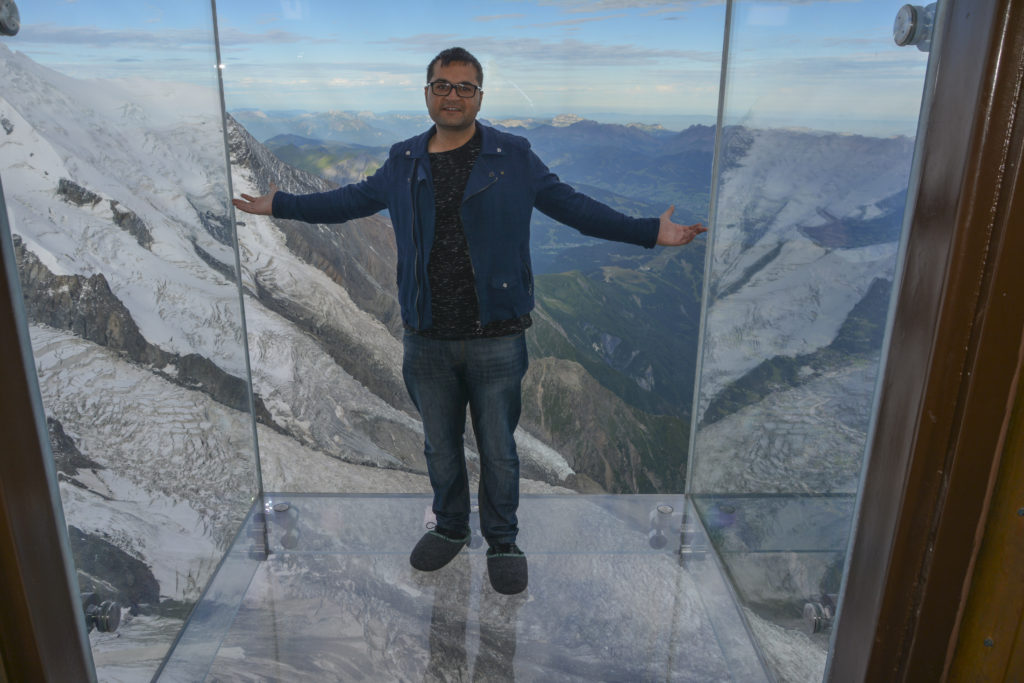 So during my recent trip to Europe, it was on my plan, and I had decided to visit Aiguille du Midi which is accessible from small ski town of Chamonix in France. I planned it to reach there from Zermatt in Switzerland. Since I had the global Eurail pass, going by train was the obvious choice as it wouldn’t cost me a dime. I shall explain how to travel by train in Europe and how to select a right train pass for you in a separate post.

Moving on, upon my return from Gornergrat I headed to train station in Zermatt bound to VISP (Switzerland) as there’s no direct train to Chamonix from Zermatt. Then I changed my train at VISP to Martigny (Switzerland) then from there to Vallorcine (France) and then finally got the train to Chamonix. Right after reaching Chamonix I started asking for directions to “step into void” but unfortunately they didn’t know about it, and it was quite surprising to me.

Anyways I headed to tourist information centre and came to know that to access “step into void” I need to take the cable car to Aiguille du Midi.

Started walking towards Aiguille du Midi station and reached there at 15.30pm and found a long queue. Upon my turn, I asked for the information to buy ticket however the information officer informed that all the tickets for today were already sold and I needed to come again tomorrow; moreover, they don’t sell advance tickets. Ticket office opens at 06.15 in the morning and first shuttle leaves at 06.30.

By then I was already quite tired and hungry, halal food was easily available at nearby cafes and restaurants. Then I headed to my hotel and watched the peaks while the sun was going down.

Next morning I reached the ticket office at 06.23 hoping to avoid the queue, but the enthusiasts were already there waiting in the line to buy tickets. By the way, the two-way ticket costs 60 Euro, and credit cards are also accepted beside cash. Access to the Step into The Void is free, as it is included in the price of the Chamonix - Aiguille du Midi 3777m cable car ride.

After buying the tickets, I was in the queue to board in the shuttle, and my turn came at 07.30.  The first cable car departs from Chamonix which is at 1035m ASL (above sea level) for Plan d'Aiguille 2317m ASL. Then from here, I took next cable car to the Aiguille du Midi 3842m ASL.

The cable car gets fully packed almost 50 people, and you cannot take pictures conveniently, never mind, because once you reach the top, you can take plenty. 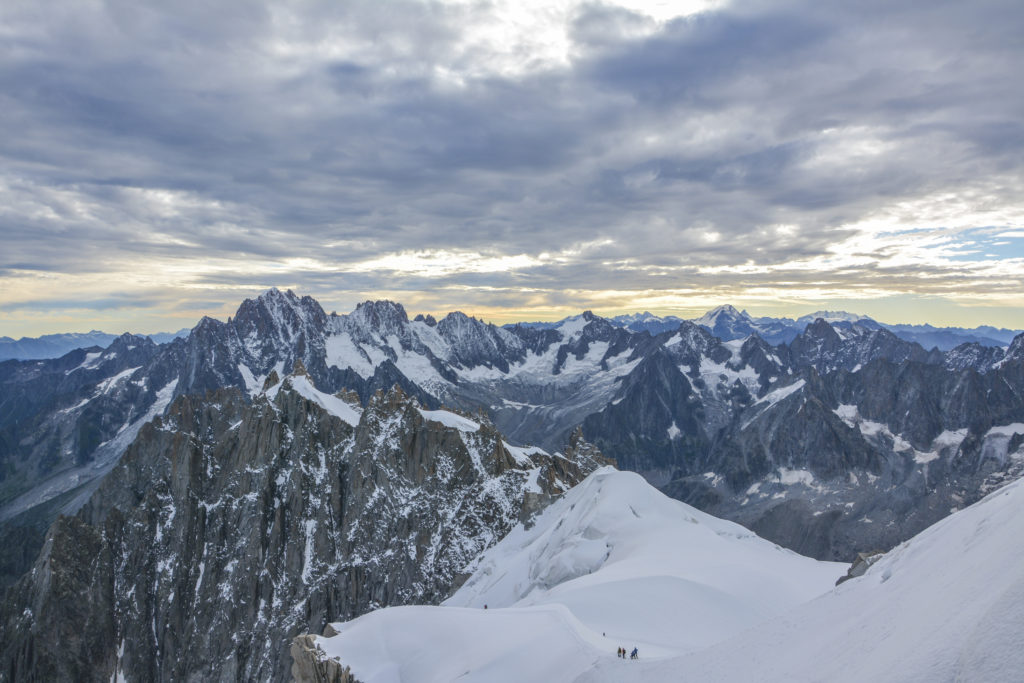 It was already too cold when I reached the Aiguille du Midi complex, but the views were stunning especially Mont Blanc was so gorgeous. Make sure you have warm clothing and good shoes, as it gets cold very quickly at that high altitude. I'll suggest bringing sunglasses, camera and a binocular with image stabilisation. If you get cold or need refreshments, there is a cafeteria, and a souvenir shop opens all year round. 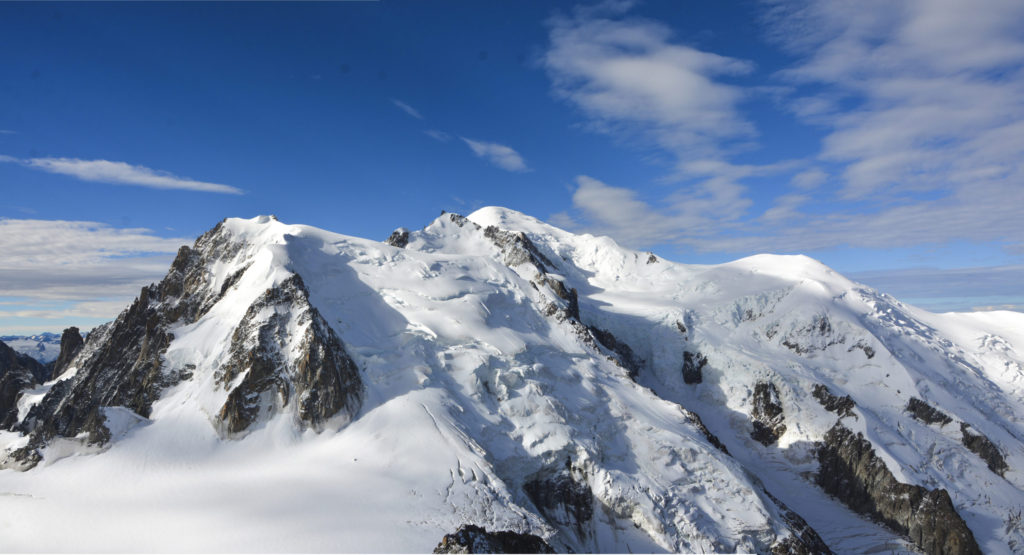 From here there was a short walk to the elevator which accesses the top platform. It’s a small lift hence the number of visitors on the top platform is regulated, so that there is no overcrowding. During the high season, it can take 20-30 minutes to access the elevator.

Finally, I reached and was ready to take my step into the void; it was incredible though I was bit scared I loved it. There was an attendant who was regulating the visitors into this glass room and was also taking pictures for the visitors from their cameras. Unfortunately, he was not very cooperative I can safely say that he was a bit rude. Another tourist girl noticed DSLR in my hand and requested me to take her photos thinking that I might be a professional photographer, however, the attendant didn’t allow that. The lady told me that she also visited this place yesterday and there was a different attendant who was very helpful.

The Aiguille du Midi is the starting point of the 3 Monts route to ascend Mont Blanc and many other sports such as Backcountry skiing or off-piste skiing and ski touring in the winter season, mountaineering and paragliding in the spring, summer and autumn seasons.

From this point, you can also take Panoramic Mont Blanc Gondola which will give you spectacular views of glaciers and untouched snow, what’s more? It takes you to Italy in just under 1 hour. If you have made this far then deciding to take Mont Blanc Gondola is a no-brainer. I bought the ticket for 30 Euro and continued my journey. 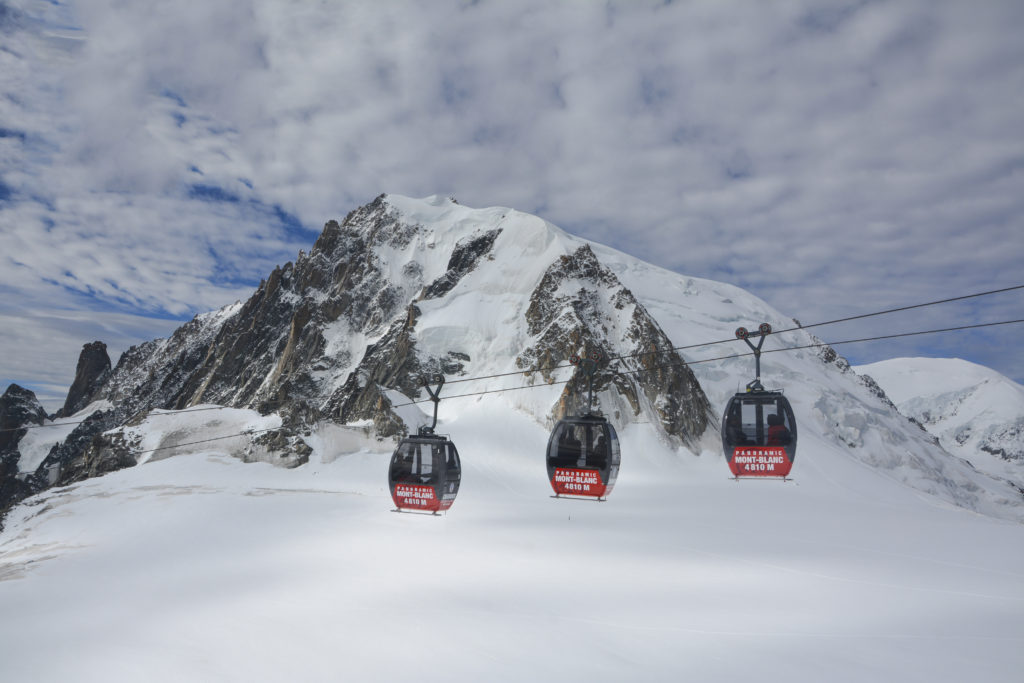 These were one of the best views I were witnessing ever in my life, the cable car was comfortable with heating, and you can also open the glass window if you want to take pictures.  Everything was super awesome. The blue sky and white surroundings of high mountain terrain admiring the crevasses below. 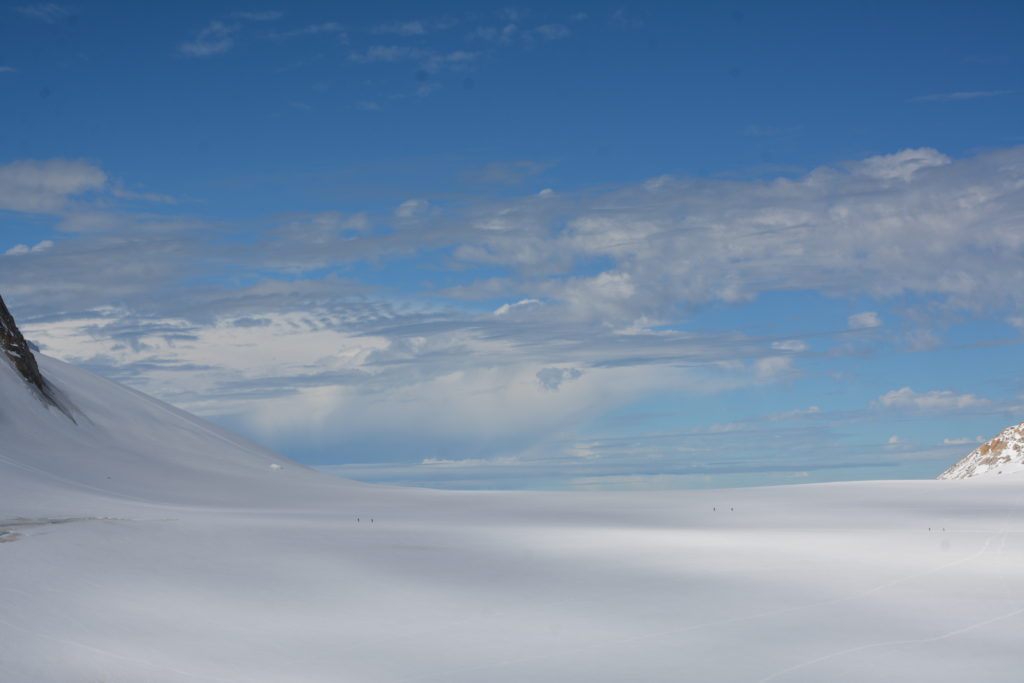 There was also a group of roped climbers scaling the glacial mass. 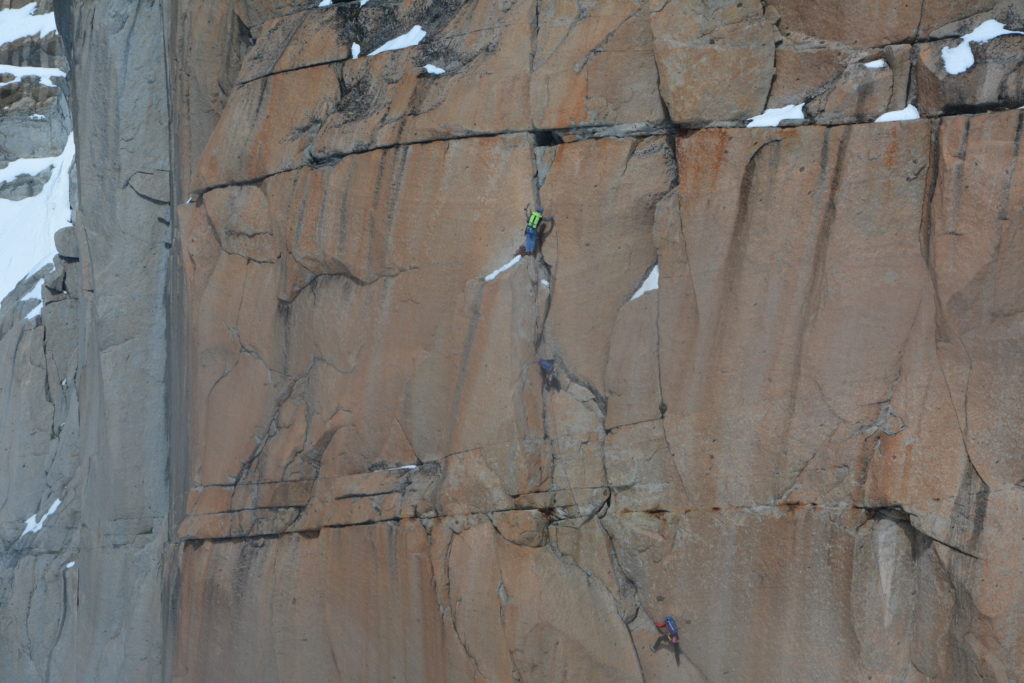 Colorful camps on the snow were adding a unique beauty to white snow. 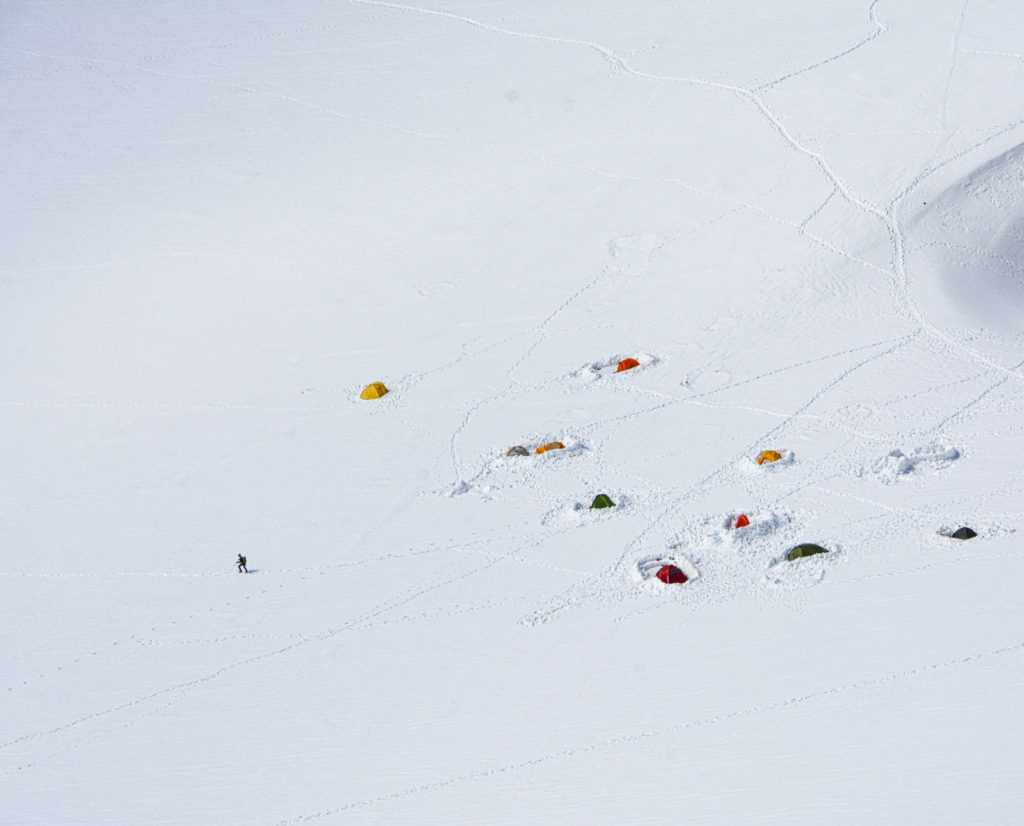 Once I reached the other end of the cable car, Helbronner station, I was already in Italy, but after spending some time here, I headed back to Chamonix as I had earlier visited most of Italy.

Upon my way back, I made this panoramic video at Aiguille du Midi capturing the 360-degree view.

Have been there too or got any questions? Leave it in the comments section and do share with your friends who are planning a trip to Europe.

Getting a UK Visa in Dubai
An Idiot in Spain
Stepping into the void: A magical journey to the picturesque Swiss and French Alps