View of killer mountain, adrenalin drive, view of the junction of three mountain ranges, the taste of hand-picked fresh fruits, fantastic views of lush green valleys, lakes and rivers, transacting at the highest ATM of the world – what else a traveller needs from one tour?

Yes, that is and a lot more I experienced on my tour to Hunza Pakistan till Khunjerab, Pak-China border. There is an attraction for almost all types of persons in this trip – adrenalin junkie, food lover, scenery gazer, driving enthusiast, adventurer – whatever, it got all you covered.

I have travelled almost all the time solo, but this tour consisted of a group of four adults and a kid. So the persons who want to travel with family will also get inspiration from this blog.

We started our journey early in the morning. Sunny but pleasant day. We started from Lahore, where total topography consists of cityscape and then plains – all that you see from the window is fields, canals and muddy rivers. The terrain begins to change from Kallar Kahar, and you start seeing mountains. Kallar Kahar is situated in salt range hosting world’s second largest and Pakistan’s first largest salt mine; Khewra Salt Mine.

A smooth ride on motorway took us to Burhan interchange on Islamabad to Peshawar motorway. Then we took the GT road and Naran road to reach our first midway stop of Naran. The road starts to ascend from a place called Kiwai. From this point forward all topography consists of mountains – the great Himalayas. A vehicle with automatic transmission is strongly recommended due to steep slopes. Breathtaking lush green valleys and mountains start from Kaghan valley. You get beautiful scenes to capture in your camera at every turn you make. 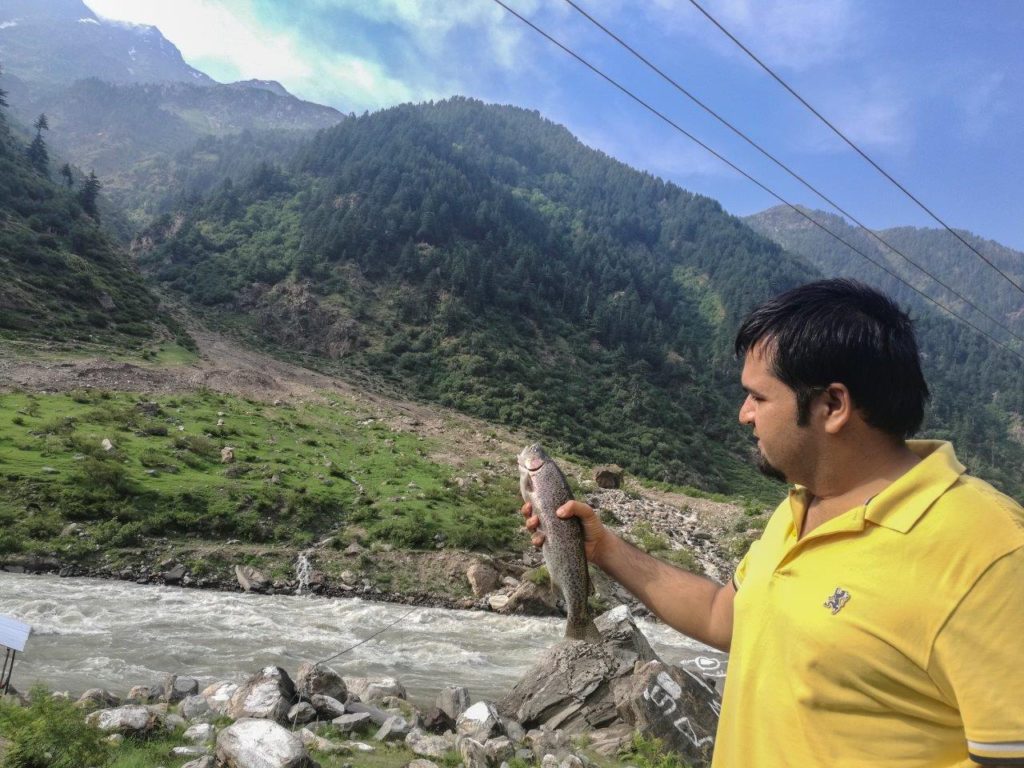 Naran is situated in Kaghan valley at the bank of river Kunhar. A crowded place because it is the base station to many scenic destinations. After twelve hours of travelling, we were just concerned with finding a hotel room to spend a night and recharge ourselves for travelling next day. During the season, finding a place in Naran can be a problem, so it is recommended for the families to get a reservation before arriving. Solo travellers or adventurers’ groups can rent camps at a fraction of the cost of a room. You’ll also find some restaurants on the way selling fresh trout, I highly suggest to try it. 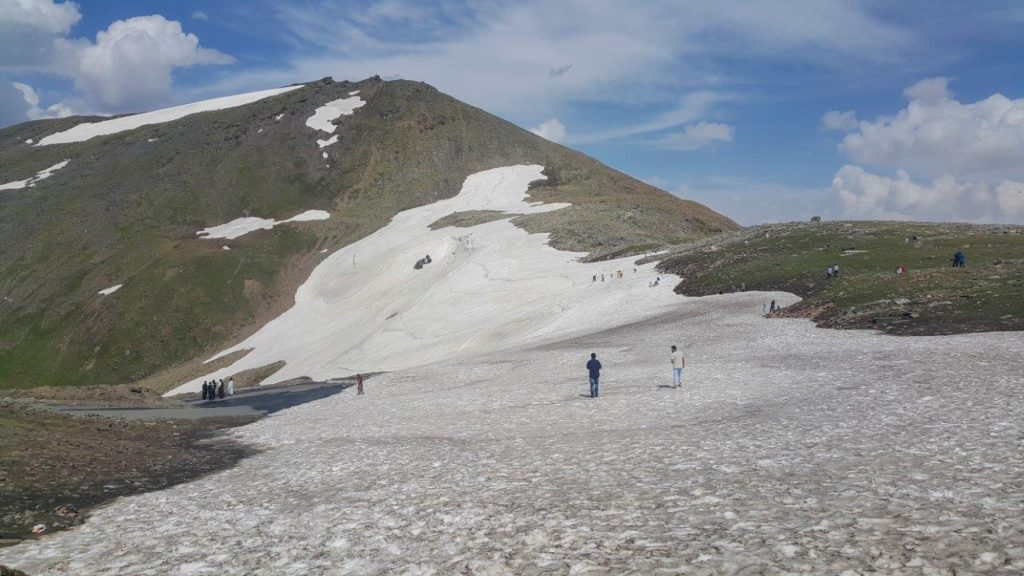 Next day we started for our second stop – Hunza. This journey requires crossing Babusar Pass which has the elevation of 13691’. Road condition is good, and one enjoys the ride through the mountains. On this route, the most note worthy was this river; where I truly felt timelessness. 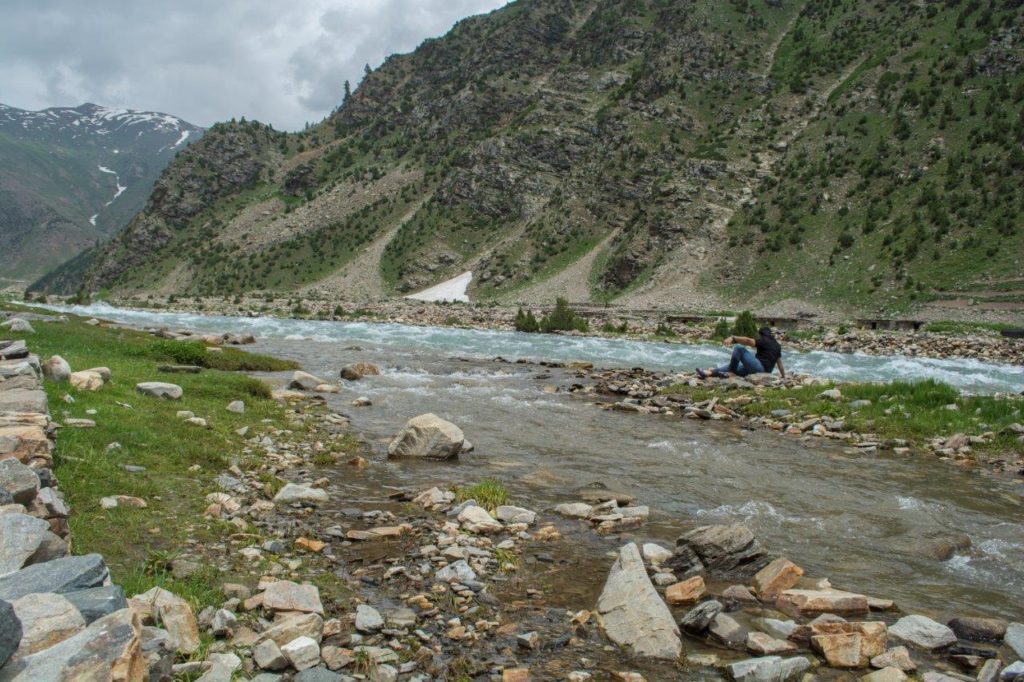 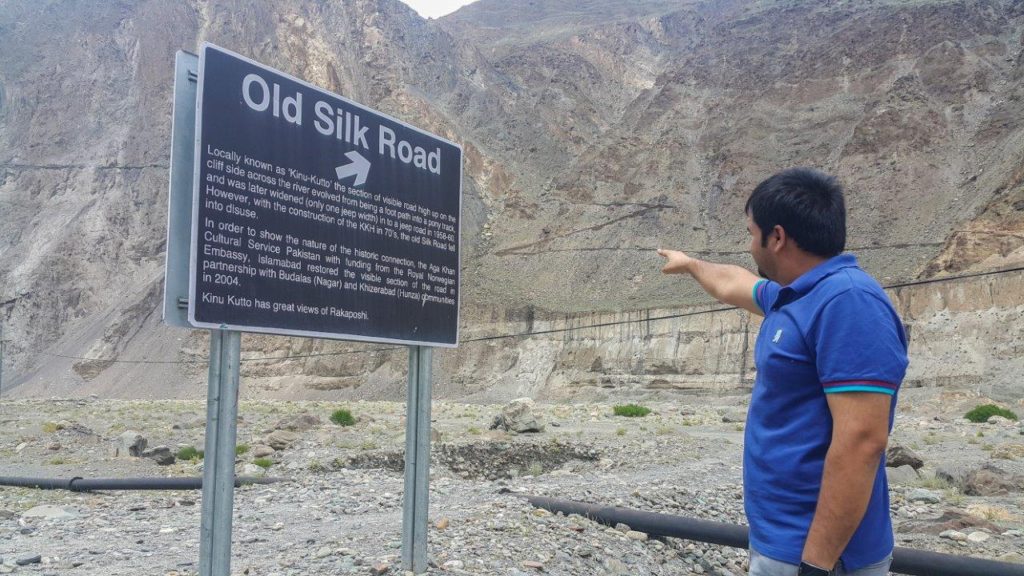 Sometimes referred as the eighth wonder of the world, KKH is one of the world’s highest paved roads. Driving enthusiasts and adventurers who once drive on KKH, literally fell in love with this route. 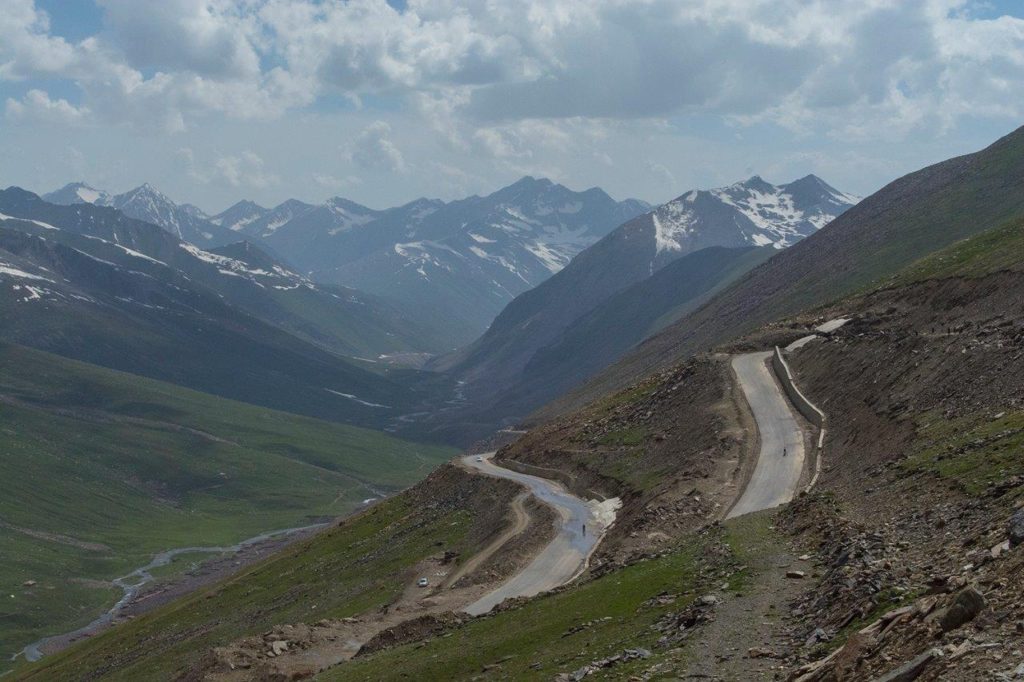 On one side there is Himalaya and on the other steep slopes and Indus river running in the valley deep below. One must drive with great caution and vigilance to avoid the oncoming traffic on sharp blind turns. Almost every year there are many landslides reported, and it often damages the KKH and blocks the traffic. It may take a day or two to clear and repair the road, so one must be cautious to keep some food and water, especially while travelling with family. We went through it safely without experiencing any blockage, except this one 😉 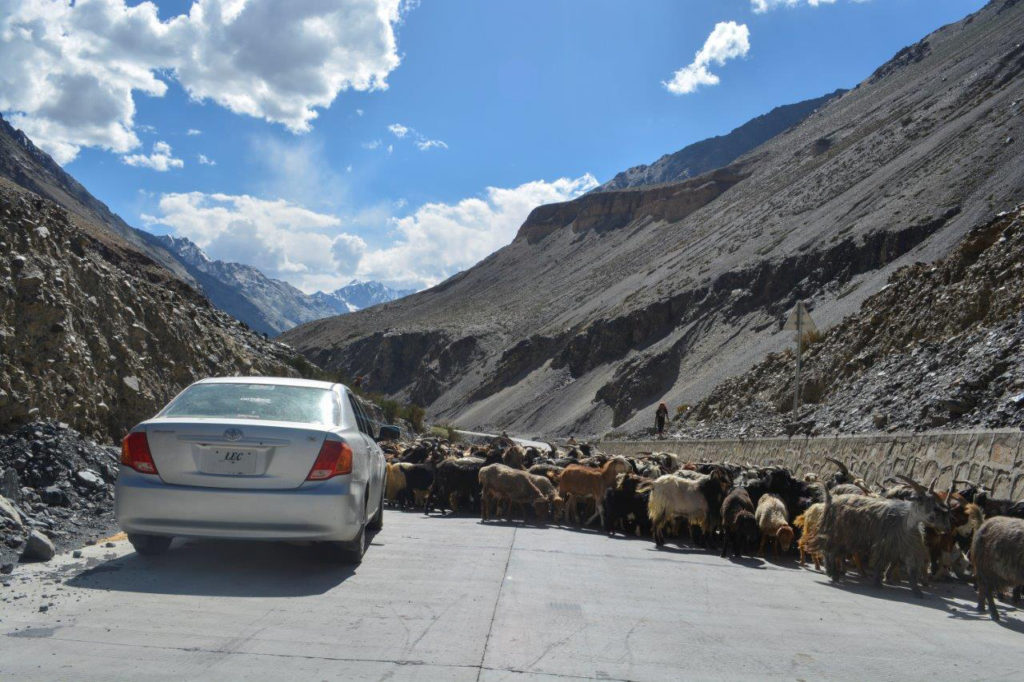 Toyota Axio is a Japanese car and imported to Pakistan as reconditioned. At KKH we had to reduce the weight by stepping out of the vehicle over the broken road, but even then its chassis often hit the stones. Speaking of the cars available in the Pakistani market, if SUV is not possible then Toyota Corolla 1.3 GLI automatic is highly recommended in sedans. It has good suspension system and ample ground clearance to pass through such broken patches of road.

Before Gilgit, there is a small town on KKH, named Jaglot. It is situated at the junction point of the three mightiest mountain ranges of the world – the Himalayas, Karakoram and Hindukush. One is undoubtedly destined to think, standing at the base of giant mountains, about being consistent in whatever one does. A new word, a new move, a new technique learned every day would unquestionably and undoubtedly lead to a wealth of knowledge, a great decision maker and a great engineer after many years of consistency. Need proof? Look at the Great Himalayas – two continental plates, Eurasian and Indian, collided 40 to 50 million years ago and the Himalayas started to uplift at the as slow rate as 1 cm per year, and it continues to do that even today. And the result is, world’s highest peak is in the Himalayas. 1cm a year, for 50 million years, get inspired!

If you ask us about the best part of our tour, then we all would unanimously say that real beauty starts from Hunza. Truly magical scenes, far more beautiful than the photos that we had seen. Trees laden with ripe, delicious fruits – cherry and apricot. A beautiful place with even more beautiful inhabitants, yes that’s Hunza. We were wondering if these are wild trees or private property when a polite young boy took us to his cherry tree and allowed us to pick as much as we wanted – and that’s precisely what we did. We ate ripe and hand-picked cherries to the maximum what we could and filled a shopping bag for the journey. We entered Hunza by grabbing lots of hospitality and cherries and apricots; good things started to happen. We got a room in KarimAbad, the capital of Hunza for night stay. A calm and peaceful town at the feet of high mountains. We visited surrounding tourist points of KarimAbad. Baltit Fort, the ancient palace of the Mirs of Hunza overlooks the town of KarimAbad. Maintained by the Baltit Heritage Trust and converted into a museum. Eagle’s Nest hotel is also nearby and gives a splendid view of the Hunza valley. There is a viewpoint just above the hotel, from here you observe the Baltit Fort, Hunza valley and six 7000 meter peaks. This point offers magnificent views at sunrise and sunset.

That night, sitting on the roof under the sky full of stars, solitude and we friends. Flute tunes riding over cool breeze took us to the journey of our own selves – we remembered the moments we had lived together, discussed the moments that we regret we were not together. That time spent talking and shivering in cold breeze strengthened our friendship.

Next morning we set off on our journey to Khunjerab. We had plans to visit the border and return to KarimAbad same day. But the beauty of the valley made us stop every couple of miles and enjoy the scenery.

Atta Abad lake is also one such wonder – on 4 January 2010, a massive landslide blocked the Hunza river thus forming a lake around 21km long and over 100 meters deep. 19 km of KKH was submerged under the water of the lake. Initially, tourists used local ferry services to cross the lake with their vehicles and reach on the other side to further proceed on KKH to reach Khunjerab. But keeping in view the importance of this road for the trade between Pakistan and China, Government immediately started working on making an alternate road, and this new road includes 7 km long five tunnels. These tunnels add to the beauty of the journey. 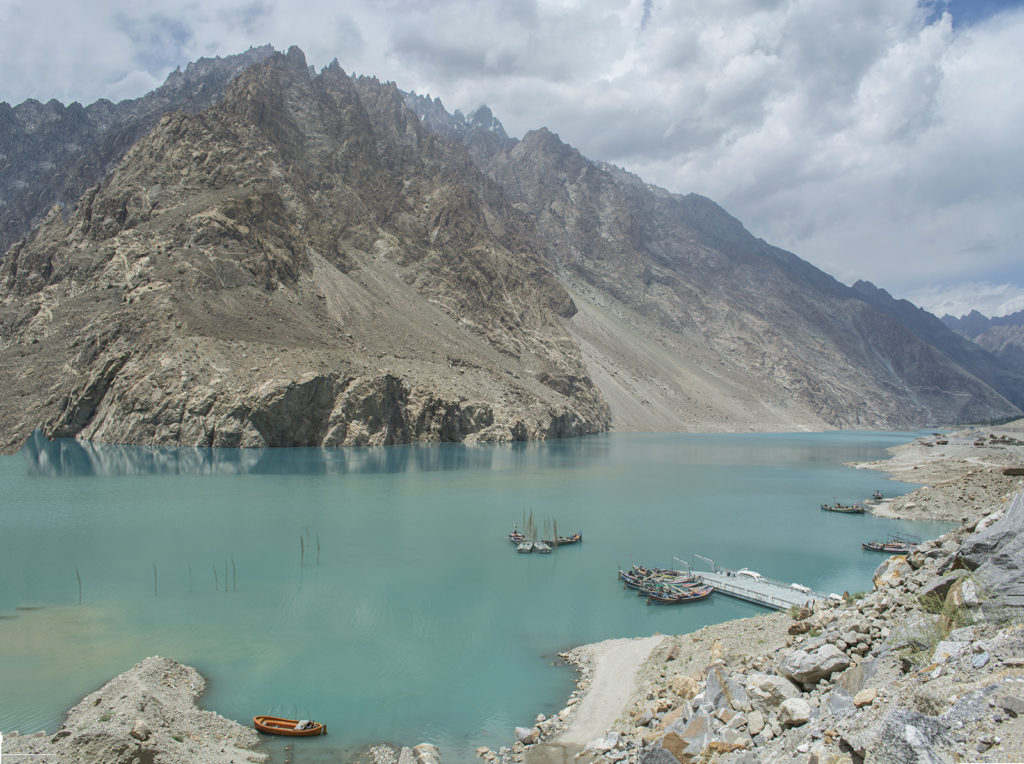 We reached Sost, the last town before the border, in the afternoon. It is located in a valley on the bank of the river and surrounded by the giant mountains. We spent that evening at river bank having BBQ. 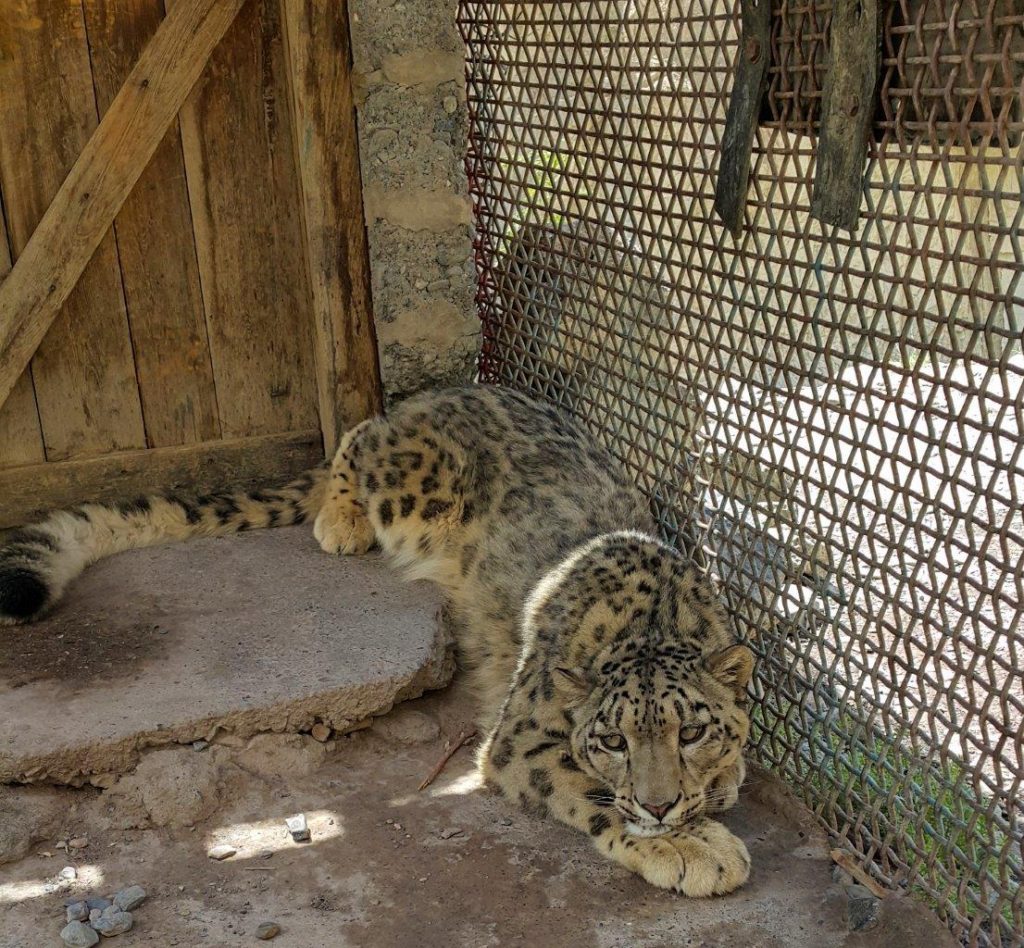 We started our journey to our final destination in the morning. We saw a snow leopard kept in the cage at a checkpoint. It was rescued when it fell in the river just at the age of six months. 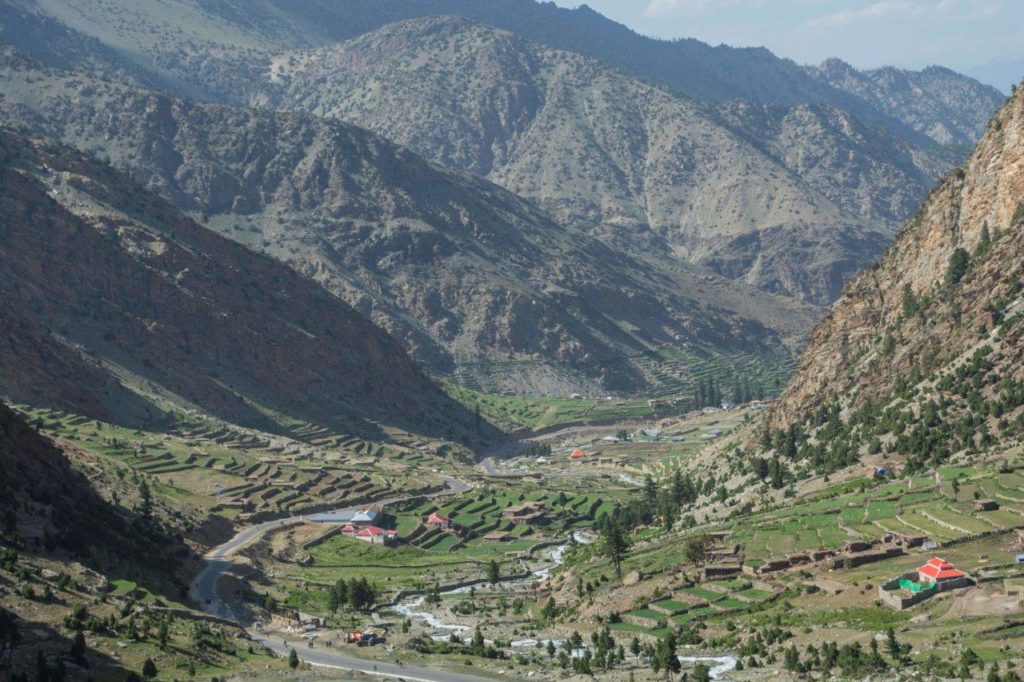 The whole route is scenic, and I suggest to take your time and admire the beauty. No need to rush, afterall you’re on vacations. 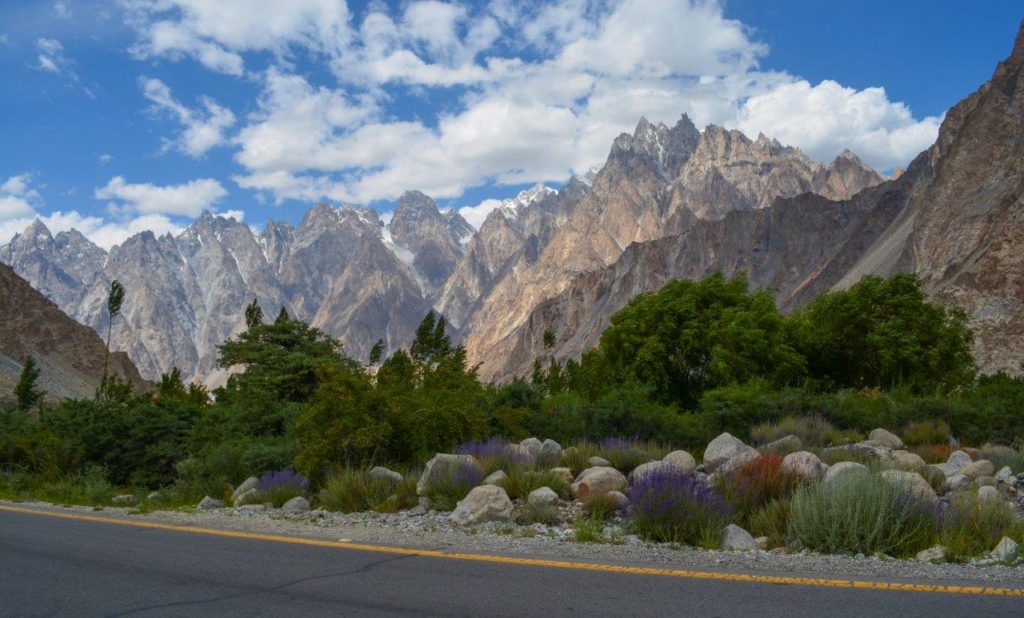 On your way to Khunjerab pass, you entered the Khunjerab National Park; which is home to many rare species such as Snow Leopard, Marco Polo Sheep, Himalayan brown bear and blue sheep. 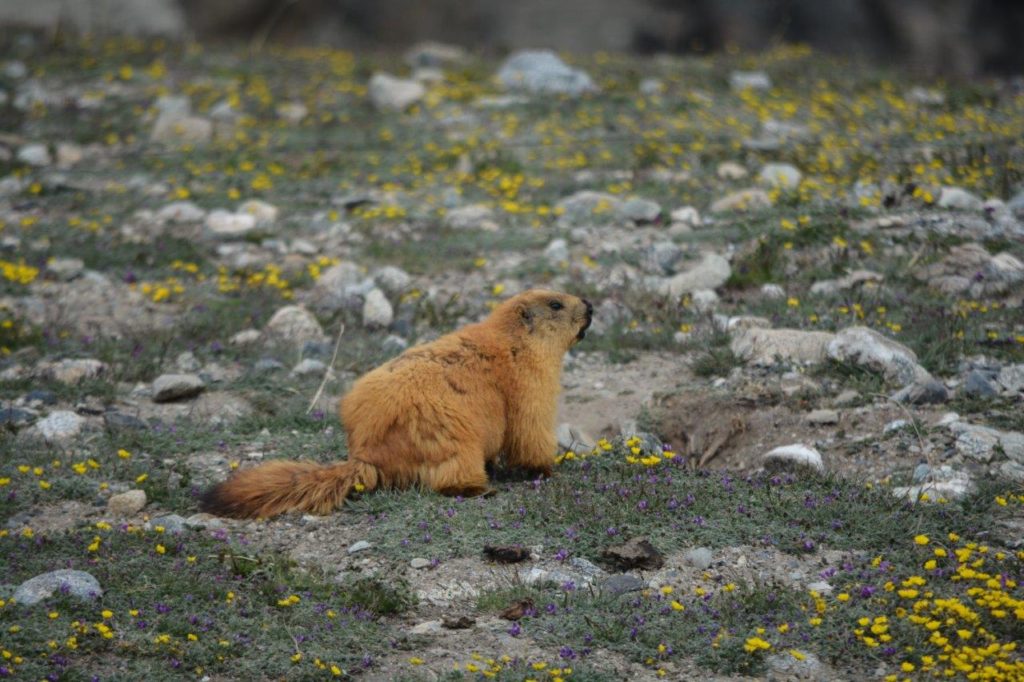 Finally, we reached the Pak China border, the Khunjerab Pass. We got to see some tourists from the other side of the border, who wouldn’t understand either Urdu or English. But the body language and warm attitude became the translator, and both sides understood how much love and respect is there in the hearts. We had photographs with the tourists and border security forces. The ATM I mentioned at the beginning of the blog was being installed at that time; it won the Guinness World Record on 18th of November 2016. It is world’s highest altitude ATM, installed at 15,396’. 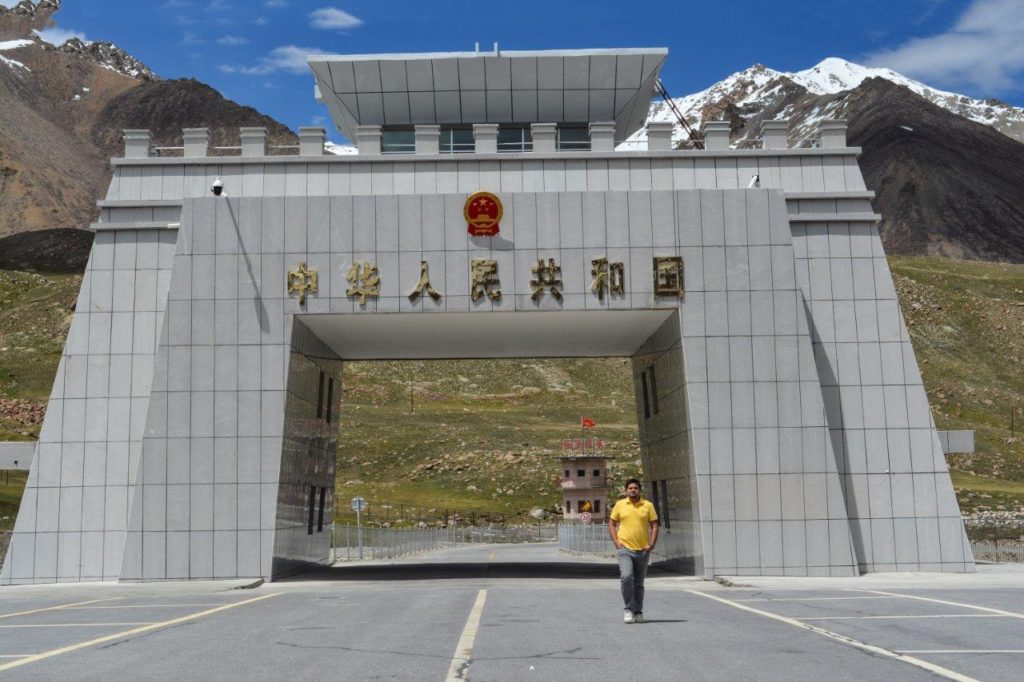 This marked the end of our tour, we had reached our destination, but the fun was not over yet. On our way back we stayed at Gulmit, a small town just before the Atta Abad lake. This town has magnificent panoramic views of valley, river, mountains (Passu cones) and vast sky.

Stuff They Don't Tell You About Fairy Meadows